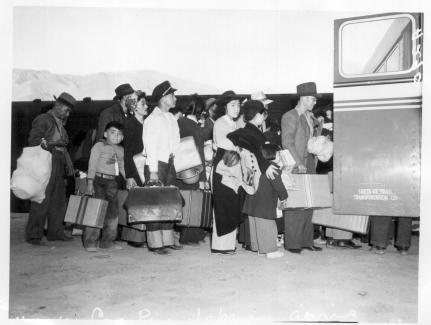 You know who I mean. The guy who thinks internment camps were a good idea. But you know what they say…

“Those who cannot remember the past are condemned to repeat it.”  George Santayana-1905

My column, Don’t repeat the Manzanar mistake, appeared in the Nevada Appeal on Christmas Day, 2007.  I believe it speaks for itself.

Mar. 21, 1942: The first contingent of 86 Japanese waits to board three buses and a truck at Maryknoll School playground at Third and Hewitt Sts. to travel to Manzanar. About 200 additional friends and family came to say goodbye. This photo was published on the front page of the Mar. 22, 1942 LA Times.

You should know that Manzanar is one of ten so-called “War Relocation Centers” to which over 100,000 West Coast Japanese Americans were sent after being given 48 hours to leave their homes, forcing them to sell or abandon belongings and property. Although it was called a “War Relocation Center,” military police armed with sub-machine guns in the eight guard towers, the searchlights and barbed wire told a different story. Manzanar was a prison camp.

6 thoughts on “A message to that orange-haired monster”