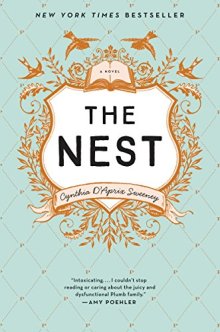 Four adult children of the Plumb family are all planning on a large gift from the estate of their father, which they’ve taken to calling “The Nest” Their deceased father believed, “…that money and its concurrent rewards should flow from work, effort, commitment, and routine” and lived accordingly. For the most part, his children have lived differently.

According to the terms of the inheritance, each would get an equal portion when the youngest, Melody, turned forty. Until now, they have each been living their lives in anxious anticipation of a very large monetary gift. They’ve run up substantial debts which they have concealed from their spouses, knowing that the Nest would bail them out. However, their mother—still alive and now remarried—pays to hush up a tragic scandal involving Leo—their charming but untrustworthy brother. Trouble is, she pays it out of the Nest, which reduces their shares to a fraction of what they were expecting. They’ve made promises they simply can’t keep, debts they can’t pay, kept secrets and told lies that will now be exposed. What to do? How will they get out of the mess they’ve helped to create? Can they somehow convince their siblings that they are more deserving of a larger share? Can they trust Leo to repay the Nest?

Each character is well drawn with quirks and idiosyncrasies that let readers get to know them and their motivations. Even the secondary characters are fully realized. Sweeney alternates points of view masterfully, so that each character gets to plead their own case as the reader is drawn through this warm, fun, and satisfying read.

“Her resolve melted and her clenched knees unfurled like the petals of a ripening peony.”

“The quick pulse at the corner of her eye was beating as if there were tiny wings trapped beneath the skin.”

“…her heart was pounding so hard she thought it might cross the street ahead of her.”

If you enjoy listening in on family dynamics—especially when they aren’t your own–you might enjoy this book. You might even find yourself grateful, as I did, that you have the family you do.

One thought on “Book review: Squabbles in the nest”