While the language is the same (mostly), my dearly beloved (db) and I were in for a few little surprises when we arrived in beautiful Sydney, Australia after a long flight on our way to a long cruise. I’m not complaining—who can complain about a chance to travel so far and see such beautiful places? No, I’m merely noticing.

The first thing we discovered was the electric tea kettle in our room instead of a coffee maker. Several varieties of tea and an Arrowroot Biscuit (!) were provided along with a couple of packets of instant coffee. Instant coffee.

Yes, I can–and did–drink instant, but you see, db and I are accustomed to early morning coffee before we attempt communication. Certainly we would survive, but seriously, how do people function and remain married without real coffee? We’ll celebrate our 44th anniversary this year and I know part of our marital longevity is due in no small part to the consumption of a couple of cups of coffee before we speak each morning.

At least they’d have real coffee at breakfast. Right?

Of course, a few of the menu choices at the hotel’s breakfast buffet also reminded me I was no longer in the USA. There were packets of Vegemite and Nutella to spread on toast, broiled tomatoes, muesli, baked beans, and boiled eggs in the shell–served hot! Still, I found enough creamy scrambled eggs, fresh fruit, and raisin toast to fill my plate.

Now to find the coffee before I sat down to eat. I looked around but found no giant urn, no thermal carafes… Oh, wait, there’s a machine. I read my choices. Espresso or long black. What about regular coffee?

Espresso is a shot, right? Not enough. But would a long black overfill the cup I held in my hand? I weighed the risk of going another moment without the requisite amount of caffeine I needed for basic social in interaction. I pressed the button for a long black and hoped for the best. Blessed hot black liquid poured forth from machine.

When I tasted it, it was stronger than an Americano, but definitely “real.” Later, with the help of google, I learned that “long black” is a term used in Australia and New Zealand for a double shot of espresso poured over hot water.

With that long black coursing through my veins and my jet-lagged brain now firing on most of its cylinders, I could face the puzzling items that would appear on the lunchtime menu: rocket salad and cos lettuce with capsicum. 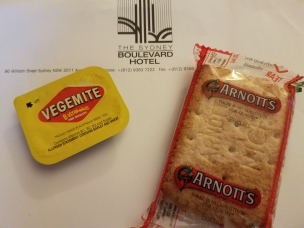 10 thoughts on “Learning to read Australian before breakfast”