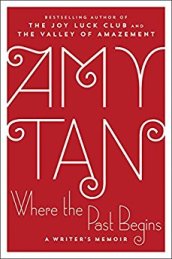 It seems Amy Tan has been trying to write her story for years. The ghosts of her past inhabit all her novels and each one discloses a bit more of herself. Quite literally. In Where the Past Begins though, she gives readers the actual stories as she sifts through boxes of documents and photos—archives of her life and her parents’ emigration. Diplomas. Letters. Journals. A forbidden love story. The children and the cruel husband her mother left behind in China. The tragic deaths of her brother and father from brain tumors within six months of each other when Amy was a teenager.

Amy tries to understand the motives of her parents and where certain of her own personality traits originated—chief among them persistence and curiosity.

The most enlightening chapter for me as a writer and longtime reader of her fiction is the one in which she shares emails exchanged with her editor as she was writing (and rewriting) The Valley of Amazement. She’d written a story that wasn’t holding together as it should.  That novel did contain a lot of detours and rabbit trails as I mentioned in this review a few years ago. Nevertheless, the fact that even Amy Tan needed help to turn this story into a novel made me feel better. Hopeful even.  Not to mention confirmation that writing is hard.

Here is a sampling of Amy’s eloquent and insightful prose.

On memory and the amygdala:

“Memory, in fact, gives you no choices over which moments you can erase, and it is annoyingly persistent in retaining the most painful ones. It is extraordinary faithful in recording the most hideous details, and it will recall them for you in the future with moments that are even only vaguely similar.”

“…without conscious choice on my part, my brain has let a lot of moments slide over the cliff.”

“I want to find those moments that my subconscious has hidden. I am more than curious—and it’s not because I’m a fiction writer who seeks a good story to write about. What’s in there is what made me a fiction writer, someone who has an insatiable need to know the reasons why things happened. In the amygdala are vast stores of disappointments and devastations, pain and wreckage. But I also want to know what the amygdala kept, because therein lies thousands of stories of how I became me.”

On the work of writing:

“But in writing fiction, the truth I seek is not a factual or scientific truth. It has to do with human nature. It is about those things that are not apparent on the surface. When I set out to write a story, I am feeling my way through a question, often a moral one, and attempting to find a way to capture all its facets and conundrums. I don’t want an absolute answer. When writing fiction, I am trying to put down what feels true.”

“The best metaphors appear unexpectedly out of the deep blue by means of intuition and my infatuation with nuance.”

“The actual writing will still be daunting. It gets harder with each novel. I will have to relearn my craft, overcome the same doubts, untangle the narrative from long detours, or take whichever detour is the story I should tell.”

On the fickleness of acclaim:

“Praise, I had learned, was temporary, what someone else controlled and doled out to you, and if you accepted it and depended on it for happiness, you would become an emotional beggar and suffer later when it was withdrawn.”

“The moon is more admired when it was full that when it was a sliver, and yet it is the same moon even when the perspective of others had changed.”

On her own fiction-writing mind:

“It is curious and open to anything. It is nonjudgmental and thus nothing it imagines is wrong. It is not bound to logic or facts. It is quick to follow any clues, but it can also be easily diverted to another direction, especially if it detects a secret or a contradiction.”

“If there is indeed a universal consciousness, it makes sense that mine would conjoin with it when the doors of imagination are flung wide open and all possibilities are allowed.”

Insight into the life and writing process of one of my favorite authors was enough to entice me to read this memoir. I’m more that glad I did and happily recommend it. Actually, I’d recommend anything written by Amy Tan. Probably even her shopping list.