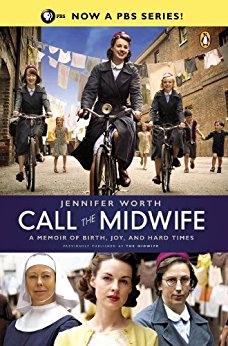 Frequently we hear folks of a certain age bemoaning progress and the passage of time. They wish for bygone days when life was simpler. Not me. Especially after reading  Call the Midwife: A Memoir of Birth, Joy, and Hard Times  by Jennifer Worth.

The author first gives us a little history of maternal healthcare before 1948 and the advent of Britain’s National Health Service.

“It is hard to imagine today that until the last century no woman had any specialist obstetric care during pregnancy. The first time a woman would see a doctor or midwife was when she went into labour. Therefore, death and disaster, either for mother or child, or both, were commonplace. Such tragedies were looked upon as the will of God, whereas, in fact, they were the inevitable result of neglect and ignorance.”

“In the mid-nineteenth century, maternal mortality amongst the poorest classes was around 35-40 percent, and infant mortality was around 60 percent. Anything like eclampsia, hemorrhage, or mal-presentation, would mean the inevitable death of the mother.”

Worth graphically describes— in sometimes intimate and cringe-worthy detail—the conditions and very real life and death struggles of the residents of the London Docklands just after WWII.

“Children were everywhere, and the streets were their playgrounds. In the 1950s there were no cars in the back streets, because no one had a car.”

Many of those children were born into two-room tenements without a toilet–or even running water–where four or more other children were already present. Some lived in ruined buildings left standing after the Blitz. Domestic violence and mental illness were common and mostly untreated. A girl “in trouble” was ostracized and–after surrendering her child for adoption–was many times forced into a life of prostitution. And while races bumped into one another frequently and companionably in the streets and at work, a mixed-race baby was unthinkable.

Those were the “good old days.”

“The Pill was introduced in the early 1960s and modern woman was born. Women were no longer to be tied to the cycle of endless babies… Women could, for the first time in history, be like men, and enjoy sex for its own sake. In the late 1950s, we had eighty to a hundred deliveries a month on our books. In 1963 the number had dropped to four or five a month. Now that is some social change!”

Fans of the television series, Call the Midwife, will enjoy becoming acquainted with the real-life Jenny, Trixie, Chummy, and Cynthia, as well as Sisters Julienne, Monica Joan, Evangelina, Bernadette. Dr. Turner and Fred are here as well.

But mostly this book is a reminder that things have gotten better. We know that access to affordable healthcare—especially birth control—matters. And to the most vulnerable women and children among us–the poor and the sick–it is a matter of survival.

3 thoughts on “Book report: The “good old days” weren’t all that great for women”