Today would have been my mother’s 95th birthday.  This Nevada Appeal column published on July 14, 2004, just ten days before she passed away suddenly.

Again I wanna see and do the things we’ve done and seen
Where the breeze is sweet as Shalimar and there’s forty shades of green. 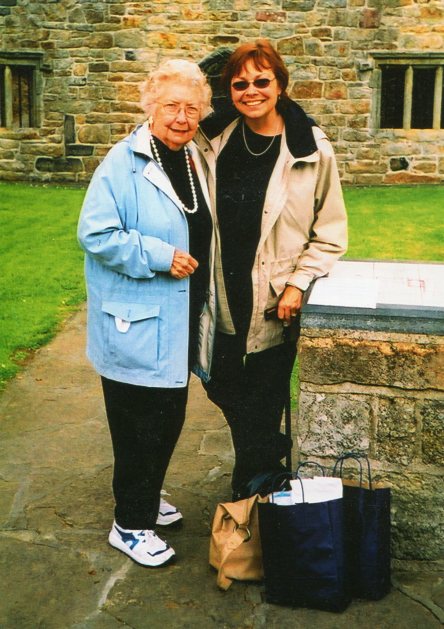 My mother and I are smiling in front of Donegal Castle in Ireland. In the picture, taken mid-way through our twelve days together, we look happy and we still fit in the frame, in spite of the full Irish breakfasts, potato-laden pub lunches, Guinness (with a bit of black currant, please), tea and biscuits in the afternoon, rhubarb crumble with custard and cream, Irish coffees after supper, and those tasty McVitie’s Digestives that sound much healthier than they are. We don’t need a wide-angle lens yet and you can actually see the castle’s stone walls behind us.

My grandmother left Ireland when she was five. Until now, no one in the family has ever returned. Mom and I were on a mission to see the land our Protestant Irish Funston ancestors left behind in Northern Ireland. We wanted a sense of what my great-grandparents’ lives had been like before they immigrated to Canada with their eight children in 1897. From family stories, we knew they left because of “Home Rule,” a complex and contentious issue concerning Ireland’s right to govern itself, over which much Irish blood has been spilled over many generations.

Because no commercial tour would help us get to the roots of our family tree, I researched not only genealogy but also tickets and accommodations on the Internet. Fortunately, I found a local guide, John Cunningham. John is a retired teacher and headmaster, a historian and author of several books on Irish history. I booked two days with him. This proved to be one of my best decisions. John customized the tour to our needs and wishes. His expertise made all the difference.

On our first day with John, we visited Killeter Presbyterian Church where my great-grandparents were married in 1872. It is still standing in County Tyrone, as is the train station where the family probably began a journey that took them first to Toronto and eventually to Los Angeles. John also helped us by sifting through old public records and taking us to the precise townlands the family had farmed. The land is some of the most beautiful I have ever seen, green to the extreme, covered with tidy, hedged pastures and dotted with charming cottages.

The peaceful pastoral scenes and picturesque villages belie a darker and sadder side, however. Ireland’s history is complicated and cannot easily be sorted out by thinking only about Catholic/Protestant or even north/south. Ireland has been brutally invaded by both the Vikings and the English and has known generations of civil unrest and terrorism.

In our brief experience, however, the Irish were universally generous and good-humored. In spite of ancient, narrow roads that were not built to accommodate trucks and buses nor the crush of modern traffic, we saw no road rage. Not even at the many roundabouts. Drivers patiently pulled to the side or backed up to give way to the other car. And waved two fingers—not one—as they passed.

A few mundane sorts of things struck us as well, and made us laugh. For example, nowhere did we find paper seat covers in public toilets. Neither did we find artificial sweetener in restaurants, nor washcloths in the hotels. What we did find though, was sweet corn used as a relish, like olives, in sandwiches. In fact, it’s even mixed with the tuna and mayonnaise for tuna salad sandwiches. And no waitress ever brought us the check without being asked.

We enjoyed lively conversations with strangers, something at which my mother and I excel. Every cab driver was a political philosopher and freely expressed his opinions about events of the day. So did the people waiting for a bus. And just as in the United States, the accent immediately gives you away. North and south sound different.

Moreover, imagine my surprise to learn that Enniskillen, a booming town in Co. Fermanagh, has been trying to build a bypass around its bottlenecked downtown for twenty years.

Mom and I asked ourselves repeatedly, “How could they have left such a beautiful place?” My great-grandparents must have emigrated for the same reasons families leave their homelands today: civil unrest, persecution, poverty, hunger. They hope to find a safe and healthy place to raise their children with the promise of a brighter future, a better life. A place where differences would not be punished or brutalized, but accepted and even celebrated.

It doesn’t matter from which country we came or in which century. That’s why we came. It’s why others continue to come and it’s why we sing sweet, sad songs of a home we’ve never seen.