Most people in Carson City have attended some sort of event here. An art class, a play, a musical performance. Even a wedding or retirement party in the 1864 Grand Ballroom. The BAC is in the heart of downtown and has grown to encompass a small complex of neighboring buildings, including the old St. Teresa of Avila Catholic Church which was turned into a performance hall. The Artisan Store offers unique handmade items by local artists. 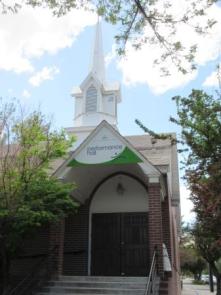 Also known as the Carson City Nevada Appeal Building., it was listed on the National Register of Historic Places in 1978.

“The site of the Brewery Arts Center is the place where Nevada’s longest-operating brewery was established. In 1860, John Wagner, started the brewery during the rush to Virginia City. Business was prospering by 1864, so a new two-story brewery was built in 1865 in the commercial form of Classical Revival, on the corner of Division and King streets, where it stands today. The brewery and a bar were on the main floor and the upper floor served as the Masonic Lodge from 1865 to 1919. The Carson Brewery made steam beer, a bottom-fermenting brew produced without the constant cold temperatures required by lagers. The pure water came from King’s Canyon Creek west of town. Hops and barley were mostly imported from California. The brewery delivered barrels, kegs and bottles of beer to local saloons, Comstock tap rooms and other towns around the state. Five kegs a week were also shipped to San Francisco for some Nevada-based customers who would drink no other brand.

The brewery was sold in 1900 to James Raycraft and Frank Golden, who incorporated and changed the name to Carson Brewing Company. In 1910, brew master Fritz Hagmeyer persuaded his brother-in-law, Max Stenz, to purchase the operation. Stenz converted from steam beer to lager in 1913, and labeled his new product Tahoe Beer, “Famous as the Lake.” He made several major improvements, including adding a cold storage room and new boiler, and expanding the bottling operation, by bottling soft drinks and mineral water from Carson Hot Springs, as well as packaging artificial ice.

I’m sure Libby shops at the Artisan Store. And it’s just a few blocks from the E.D. Sweeney building where Sylvia and Claire live.

If you’re from Carson City, what events have you attended here?