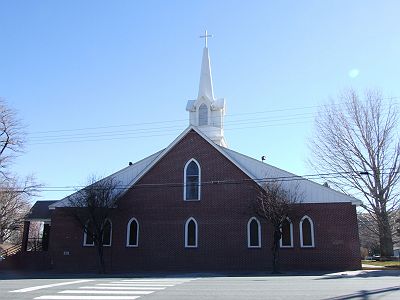 St. Teresa of Avila Catholic Church has a long presence in Carson City and in the fictional Libby’s McCormack-Cooper’s life. She and her family attended mass there. She and Jack were married there. It’s also the setting for this deleted scene from my novel, US, NOW AND THEN when President Kennedy is Assasinated.

Today, their eighth-grade math teacher, Miss Donnelly, was passing back quizzes. Claire shrugged at her score–76%–and went back to writing a note to Libby about that new tall boy in school. Most junior high boys hadn’t hit their growth spurts yet and Claire was already five-eight, causing her to slouch as she scanned the hallways for heads that stuck up above the crowd. She was envious of Libby’s five-foot-two frame and the fact that her breasts had already arrived. Claire folded the note and passed it to Libby in the seat in front of her. A moment later, Mr. Woods, the vice-principal, opened the classroom door and stepped in. His face was red. He whispered something to Miss Donnelly, whose face drained of color. She clutched the collar of her dress, teetered on her feet, and sat heavily against her desk.

Mr. Woods announced, “Please excuse the interruption, boys and girls. I’m afraid I have some very bad news. President Kennedy has been shot in Dallas. He died a few minutes ago. I’m sorry.”

There were a few gasps, and then silence before whispering began. Claire looked up at Libby who had turned around. She had tears in her eyes and a look of near panic on her face.

Miss Donnelly walked out of the room. No one moved. Everyone sat there, silent and confused. Could they leave? A few minutes later she returned with a television on a wobbling cart. She turned it on and adjusted the antenna. The class sat in silence as Walter Cronkite told and retold the story. Why would someone kill the young, handsome president with the pretty wife?

That afternoon when they arrived at Libby’s house, the drapes were closed, the living room dark, except for the blue-gray glow of the television. Even in the dim light, it was obvious that Mrs. Mac had been crying. Her hands gripped a crumpled handkerchief. The girls sat on the floor and watched in silence. Mr. Mac came right home after school. He bent and patted his wife’s shoulder and kissed her cheek.

“I can’t believe this happened,” Mrs. Mac said. “And for God’s sake, couldn’t someone please get Mrs. Kennedy something else to wear? She’s covered in blood. And those children. Babies really.” And her sobs started again, she dabbed the handkerchief at her eyes, her nose. She stood then, walked to the hall closet, and grabbed her coat.

“I can’t watch this any longer, Mike. Watch the boys. They’re playing in the backyard. Open a can of soup if anyone gets hungry. Come on girls,” she sniffed. “Libby, get a scarf for Claire. We’re going to church.”

Claire was not Catholic. She wasn’t sure she was anything, although she did like going to church with Libby’s family. And she certainly didn’t want to watch the same sad story over and over on tv. They rode shoulder to shoulder the few blocks to St. Teresa’s church in the McCormack’s station wagon.

The nearly bare cottonwoods lining the streets pointed their black fingers into the darkening sky. An icy wind kicked up and gusted down King Street, causing collars to be raised and hands to be stuffed into jacket pockets. People quietly hugged each other in greeting before climbing the steps and filing into the warmth of the glowing church.

Mrs. Mac made a small offering at the statue of the Virgin Mary, lit a candle, and said a brief prayer before finding a place in a pew. She pulled two rosaries from her purse and handed one to Libby. They knelt and began reciting the Rosary. Claire joined them on her knees, folded her hands, and closed her eyes. Libby snuffled beside her. With her eyes closed, Claire felt and heard the murmurs, the sighs, the occasional sobs as the sanctuary filled.

The young President was someone’s husband and father. His death felt oddly personal, like losing her own father again. Tears leaked out the corners of her closed eyes and ran down to her chin, where she caught them with the sleeve of her sweater. Those around her wouldn’t see that her tears were not only for the President, but for herself and all fatherless children.

After a few minutes, without anyone leading them, the parishioners fell into a unison recitation of the Rosary. Sometimes the sound of someone weeping would break through, but the rhythmic repetition of hundreds of Hail Marys, calmed and comforted Claire. 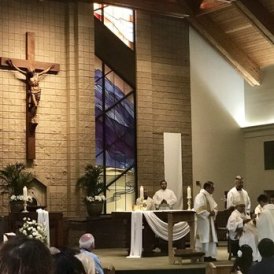 Years later, when Libby’s father dies, a new church has been built across town. Understandably, Libby opts for the historic St. Teresa’s for his memorial service, which had recently turned into the Brewery Arts Center’s Performance Hall.