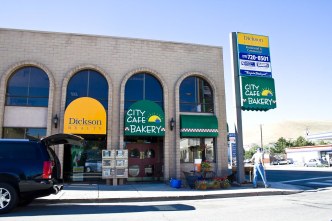 City Café & Bakery on the corner of South Carson and 7th Streets closed in 2010 but was a favorite early morning coffee place, where Libby and her teacher friends would meet once a week before school. Libby especially loved the Blackberry Bran Muffins for breakfast, suspecting that they were not as figure-friendly as their “no-added-fat” label implied. Once a week wouldn’t hurt, right?

While Libby and Jack set off for new adventures in the early 2000s and most of the group have retired, you can still find them meeting at Paul Schats’ Bakery. Today Carson City has multiple other fine, locally-owned choices for early mornings, including Artisan Café, Comma Coffee, and L.A. Bakery.

Here’s a deleted scene from US, NOW AND THEN that takes place on the morning of September 11, 2001. Libby’s daughter Norah had moved to New York City just a week before. Libby is getting ready for work and her weekly coffee date at City Café.

“My God. Honey, look at this!” Jack called to her in the kitchen.

The television merely provided background noise until Jack alerted her to the screen. It was only then she noticed it was Good Morning America host, Charles Gibson, and not the local morning anchor. Why was he on so early? And he sounded alarmed. Then she saw why. One of New York City’s World Trade Center towers was in flames. Something–a plane?–had crashed into a tower. As Gibson reported the terrible thing that was happening, Libby watched another plane fly directly into the second tower. The very definition of surreal.

“Norah,” she said aloud as she reached for her phone. Their older daughter had moved to New York to start that UNICEF job last week. She pressed the speed-dial. Jack stood to hold her as she dialed. Both stared at the TV screen, unbelieving, mouths open.

Libby shook her head as she listened to a recorded message. “I’m sorry. All circuits are busy. Please try your call again later.” The calm voice of the operator belied the panic gripping Libby and caused her entire body to tremble. Her breath came in small, quick gasps.

“Where was she supposed to be this morning? Working?” Jack had his own cell phone out. He got the same message.

“I don’t think she was starting until tomorrow. She could be anywhere.” Libby felt her insides knot. “What should we do?”

“Not sure. Act normal. Wait until we know more, I guess.”

“Are we under attack? Are we at war?” Libby remembered her parents’ stories about Pearl Harbor. Was this like that? She remembered the Kennedy Assassination. Her phone rang. “Norah?” she asked without looking.

“No, Mom. Annie. I just saw the news and I tried to call Norah. I can’t get through. Where is she? Do you know anything?” Libby heard the alarm in her younger daughter’s voice.

“No. We don’t know anything. We can’t get through either.”

“Let’s keep the line open, honey. Just in case. I’ll call you when I hear anything. And Annie?”

“I love you.” She clicked off and redialed.

Jack looked at his watch. “I’ll keep trying. You do the same.” He kissed her forehead. “I love you. I’m sure she’s fine. She probably can’t get a call through either.”

Libby nodded. And Jack was gone.

She looked at her own watch. Better get a move on. Act normal, Jack had said. Act normal. Libby doubted even Meryl Streep could pull that off, but she’d try.

Libby kept one eye on the sky as she drove to City Café for her long-standing Tuesday morning coffee with friends. Four of them–five, now that Claire had moved home–had been meeting every week for years.

Was it her imagination or were there more sheriffs and NHP on patrol this morning? Where were they going? Would there be school today? Who had done this? She parked and dialed again. Again, the recording.

Claire, wearing a baseball cap and running clothes was in line ahead of her, her cell phone in her hand. She held her phone to her ear, biting her lip. Claire still had dozens of friends and former co-workers in the city. And of course, she was trying Norah as well.

“Can’t get through. You?” Claire asked as she put her arm around Libby.

“Not yet. Any news from your friends?”

“Everyone competing with all the mothers in America.”

“In the world,” Claire corrected her gently.” Thousands of people work at the World Trade Center. Thousands.”

The others– a fourth-grade teacher, a computer teacher, and a school librarian–were seated at the corner table. Libby and Claire joined them. No one knew any more than she did. She rested her hand on her cell phone near her muffin.

The lack of information didn’t keep anyone from expressing his opinion, however. Cafe regulars, including a nearby table of Rush-heads, kept up their angry, fearful chatter.

The librarian was unsure the topic would even come up at school. The children may not know anything about it yet.

“I’m not going to bring it up. They wouldn’t understand anyway. Let their parents explain it to them.” She was adamant as she shook her head and chewed her bagel.

“But won’t they have questions? Aren’t you going to at least answer their questions?” Libby asked. Older children would definitely know about the crash by the time school started. They’d know where New York was. They’d know that people died.

The conversation swirled around her, but Libby wasn’t really listening. No, she wouldn’t bring it up, but she felt obligated to answer questions, to address the worries, the fears of her students. Six-year-olds are ego-centric creatures. They have little appreciation for much outside themselves, their own home, their school, their town. How could she illustrate just how far away those burning buildings were? Maybe she would show them a map of the United States, the globe. Better review what to do in an emergency, too. What would they need to know? What more could first graders absorb?

She nibbled at her muffin as she tried Norah’s number again. Again, the recording taunted her. She couldn’t linger today. She had to do something. Maybe Norah can receive email.

“I’ve got to get to school. And my computer.” Abruptly, she grabbed her half-eaten muffin and coffee. She got back in her car and drove toward her school. Please, God. Please. Please.

Libby tried Norah again and again, even while driving, breaking her own cardinal rule of “Hang up and drive.” She pulled her Subaru into the school parking lot. Striding through the parking lot, through the doors, down the hallway to her classroom, she redialed repeatedly.

She turned on her classroom computer and tapped her fingers nervously as it booted up. Why did it seem so slow? Finally. She clicked to open her email. Nothing. She quickly composed and sent an email.

“Saw the news. Worried. Called, but circuits are busy. Let me know you are okay in ANY way you can. We love you. xoMom.”

Libby kept her email program open so that she’d be able to see an alert from across the room. She looked at the classroom clock. 8:15. That’s 11:15 in New York. Where could Norah be? She could be sight-seeing or shopping or. . .

Unexpectedly, a vision came to Libby. In it, Norah–not the grown-up Norah, but the child Norah–lay sleeping in God’s arms. God, of course, was the white-haired God from her children’s Bible, with a long white beard and robe. Libby had no idea whether Norah was alive or dead, but the vision comforted her. She wiped an escaping tear with the back of her hand as knocks on her classroom door pulled her attention back to the room. Libby opened the door and stood there, hugging and being hugged by anxious children. Her eyes scanned the sky warily.

Excited first graders related what they had seen on television, what their parents had told them. They’d seen the planes fly into the towers over and over again as the television reran the tape of the crashes. Libby realized that their little six-year-old brains believed it was still happening. That airplanes somewhere were still flying into buildings. How can I not tell them what’s happening?

The bell rang and as the children filed into the room, she counted. Twelve, thirteen, fourteen. . . Not twenty-three? Where is everyone? Did fearful parents keep their children at home? Did they believe that this was just the beginning of a larger attack?

She glanced at the computer screen. Nothing.

She asked hot lunchers to raise their hands. Nothing.

The class stood and recited the flag salute then sang “America the Beautiful.” As she sang, “God shed his grace on thee” the alert popped up. Still singing, Libby walked over to her desk and opened the message. Norah.

And as the class finished singing “from sea to shining sea.” Libby’s voice cracked. Two tears ran down her cheek. Thank you, God.