Despite its long history and prime location across from the Legislature at the corner of Fifth and Carson Streets, the Ormsby House has become something of a local joke and white elephant. It’s been quite a tumble from her former status. 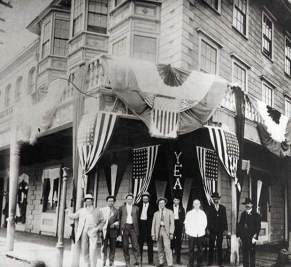 The original Ormsby House was built in 1860 by Major William Ormsby, at the corner of Second and Carson Streets. Major Ormsby was killed later that same year in the Pyramid Lake War. The hotel lasted until the early 1900s, when it was purchased by Basque immigrants, Dominique and Therese Laxalt, who also ran the French Hotel. The Laxalts had six children, two of whom are Nevada legends—former Governor Paul Laxalt and the author, Robert Laxalt.

In 1972, a brand new Ormsby House was built by Paul Laxalt, at the corner of Fifth and Carson Streets. 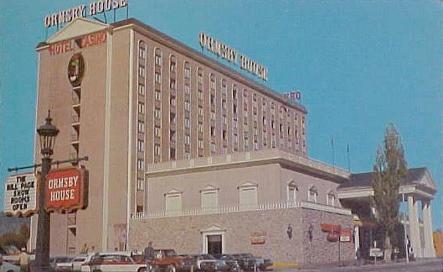 This is the Ormsby House where the fictional Claire Jordan worked as a cocktail waitress in 1972.

In 1975, the Laxalts sold the hotel-casino to Woody Loftin. Upon Woody’s death in 1985, it passed to his son Truett Loftin. Loftin spent a small fortune building a large parking structure.

About this time, Nevada casinos began receiving competition from Indian casinos in California. The Ormsby House was forced into bankruptcy protection in 1990. In 1993, lenders foreclosed on the property and it shut down. The Ormsby House stayed closed until 1995, when it was reopened by Barry Silverton. Then in 1997, The Ormsby House went through bankruptcy and foreclosure again. This time the new owners appointed former Nevada lieutenant governor and future Reno mayor Bob Cashell as their general manager. Cashell managed well, turning the property around. In 1999 it was sold to Carson City businessmen Al Fiegehen and Don Lehr, owners of Cubix Computer Corporation. They tried to keep the casino open during the remodel but finally had to lay off all the employees and attempt a complete inside-out renovation, which was never completed. While several buyers have expressed interest in the property, building permits have expired and it sits empty today.

This was where my husband and I stayed with our baby daughter when we first came to Carson City in 1977 to buy a home. We enjoyed coming here for the breakfast buffet and for many events held in the large rooms upstairs. What memories do you have of the Ormsby House? Did you or someone you know work there?