Today is Flag Day, commemorating the adoption of the flag of the United States on June 14, 1777 by the Second Continental Congress. The flag they adopted was not the Betsy Ross flag that we all think of. Rather, it was the one designed by Francis Hopkinson, a delegate from his home state of Pennsylvania and a signer of the Declaration of Independence. Note the six-pointed stars in an array instead of five-pointed stars in a circle. I wonder if there was even a debate over which flag to adopt. And how did Ms. Ross react to the snub? Still, I believe Betsy wins out in the end because her flag is the one we remember. 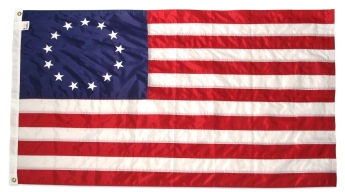 More than two hundred years later, America is going through another turbulent era. A pandemic for which our only defense is isolation. Systemic racism that we still haven’t addressed. Divisive rhetoric from our supposed leaders resulting in frustration, anger, and violence. We can’t even talk to our neighbors or relatives for fear of inciting an ugly incident.

It makes even patriotic folks like me question ourselves. I admit I’m a big sap when it comes to my country. After 9-11, I couldn’t get through the Pledge of Allegiance or “America the Beautiful” without my voice catching. As an elementary school teacher, tears were a daily occurrence for a while.

While I love America,  it’s sometimes hard to love my fellow Americans. Especially when I see even our most beloved symbols become tarnished by those who use them and for selfish, hateful, un-American purposes.

Still, our flag stirs something in me. I think I feel much as Stephen Sondheim did when he wrote this “Flag Song.” Not familiar with it? You’re forgiven. It was cut from his musical, “Assassins.” I’m a fan but hadn’t heard it until this past spring as part of an online tribute to Stephen, sung here by Brian Stokes Mitchell.

‘Where are the heroes?’

You can shout about

How everything’s a lie.

Then that flag goes by…

I think it’s a perfect Flag Day anthem for even the most cynical of us. Perhaps we can stitch this country back together.