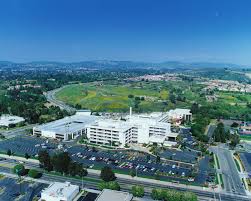 When the fictional Sam Wylder’s father is ill in 1972, he’s treated at the very real St. Jude Hospital in Fullerton, California. Almost thirty years later, the intersection near the hospital is the scene of an accident that changes Sam’s life.

St. Jude is a sprawling facility now but had some humble beginnings with the help of the Sisters of St. Joseph. From the Providence website, I learned about these milestones.
1953 – A group of physicians, led by Ramiro Fernandez, M.D., meet with Mother Felix of the Sisters of St. Joesph to see about building a new hospital. It is Dr. Fernandez’s wife, Emily, who suggests the name St. Jude, the patron saint of desperate situations.
November 24, 1953 – The hilltop property that St. Jude would call home is blessed and dedicated. A businessman, Miles Sharkey, donated the land with the stipulation that it is used to build a hospital. Of the 17 acres acquired by the Sisters, the first 7.5 acres is deeded to them for $10.
May 11, 1957 – Over 2000 people stood proudly in the rain to see the opening of the new St. Jude Hospital. In the words of one reporter, “This is the day we have been waiting for. All of Orange County rejoices over the completion of the ultramodern St. Jude Hospital.” At the helm of the new hospital was Sister Jane Frances Power, CSJ, who served as St. Jude’s president for the first 30 years.
1962 – St. Jude opens a new 125-bed wing, doubling the capacity of the hospital.1964 – A new Cardiac Care Unit places St. Jude among the first hospitals in the nation to offer this specialized service. A young surgeon, Paul Ovando, M.D., implants the county’s first cardiac pacemaker at St. Jude
November 25, 1971 – St. Jude opens the county’s first inpatient rehabilitation unit and becomes known as St. Jude Hospital and Rehabilitation Center.

St. Jude Hospital is also the site of a personal milestone. Joseph Tseu M.D. removed my tonsils there in 1958, just after my eighth birthday. I was in the second grade and had missed nearly half the school year with alternating ear infections and tonsilitis. In third grade–now minus tonsils and adenoids–I didn’t miss a day. You can see the difference between my second and third-grade selves in these pictures.

In my novel Us, Now and Then, Sam and his wife Christy manage the Wylder Nursery in nearby Yorba Linda. Christy, a spunky blonde mother of three teenage sons, runs Thistle Dew Nicely, the Victorian-themed flower and gift shop within the nursery. She’s killed in an accident at this intersection. In the deleted scene below, Sam’s mother Inez tries to offer comfort.

“It’s Christy. She’s—she’s dead.” Sam choked on the words.
Through his sobs, Inez pieced together what had happened. Christy’s delivery van had been stopped at the intersection in front of St. Jude Hospital in Fullerton. A kid from Brea failed to stop his pick-up truck and pushed her into the path of a ready-mix truck. She’d died instantly.

The morning after the funeral, Inez answered the knock at her door. There stood Sam. She looked up into the storm-clouded eyes of her first-born and recognized the pain. Wrapping her arms around his waist, she rested her ear against his chest and listened to his broken heart.
“I know, son. I know. You believe you won’t ever laugh or smile again. I know.”
Inez brought him inside and closed the door. They sat on the sofa. She held his hand and watched him shut his eyes tight against the tears he’d managed to hold back during yesterday’s service.
“It’s all right, son. Let ’em go.”
“Yesterday. . . I was afraid. If I ever started. . . I’d. . . never. . . stop.” Sam said between sobs.
“I know, honey.” And she did. Nearly thirty years ago, her own husband had died. The pain–or at least the memory of pain–was still there, just below the surface. It colored everything. She felt a tear creep down her cheek.
“And if one more person asks how I’m holding up, I—What am I supposed to say? ‘Fine, except my wife was just crushed by a CEMEX truck and I wish it had run me over at the same time?’“
“They don’t know what to say. No one does. Because nothing they say will make a difference.”
“There is an ache in my chest. Physical pain, you know?”
Inez patted his knee. They sat a long moment without saying another word, just riding the wave of grief that bore them both into the future.
“I just made a fresh pot of coffee. Have you eaten anything?”
“Jacob wanted to make breakfast this morning, but I wasn’t hungry. Coffee sounds good.”
“I’m going to make some toast. Raisin toast. Want some?” She knew it was a favorite of Sam’s. “With peanut butter?” Inez dropped bread into the toaster. She reached for the Extra Crunchy from the cupboard and handed it to Sam. She poured two cups of coffee. They sat in silence at her breakfast table.
The toaster dinged. Sam jumped up to remove the toast and put in two more slices. He spread peanut butter onto both slices and offered one to his mother. He sat down and gave a satisfied sigh when he took his first bite.
“Do you think Kate and Joanie and the girls we have now can handle the grand opening of the new store? Or will we need help? Or postpone it? Shut it down? Can Thistle Dew operate without Christy?” Sam took another bite.
“Your sisters are capable of running everything for a while. And you shouldn’t be worried about that now. You can think about all that later.”
They sat in silence again. The toaster dinged again, but neither of them moved. The brief respite from grief was over.
“What do I do now, Mom? How can I do anything? I feel like my center of gravity has shifted. I’m wobbling. How did you handle this?”
Inez didn’t answer right away. What wisdom could she offer? What comfort? She looked toward the patio window to the blue sky where the sun had just gone behind a small cloud, briefly putting the landscape into shadow.
Looking back at Sam, she said, “I forced myself to breathe in and breathe out, over and over until it became a habit again. Then I practiced putting one foot in front of the other until that became a habit. Little by little, the physical pain went away. Your dad and even his death became a memory.” The sun came out again. It always does.
“And you stopped missing Dad?”
“Oh, no. Never. I miss him every day. But new memories get piled on top. And most of those are happy ones.” Lee would have been eighty this year. They’d been cheated of all those years together. Still, she was grateful. “He would have been so proud of you and what you’ve built. Your family. Somehow, you learn to live without that piece of yourself. Like an amputee learns to get along without an arm or a leg. You adjust. You will find your way, honey.”
“I can’t imagine ever feeling normal again.” Sam didn’t look her in the eye but looked out the window. The landscape was in shadow once again.