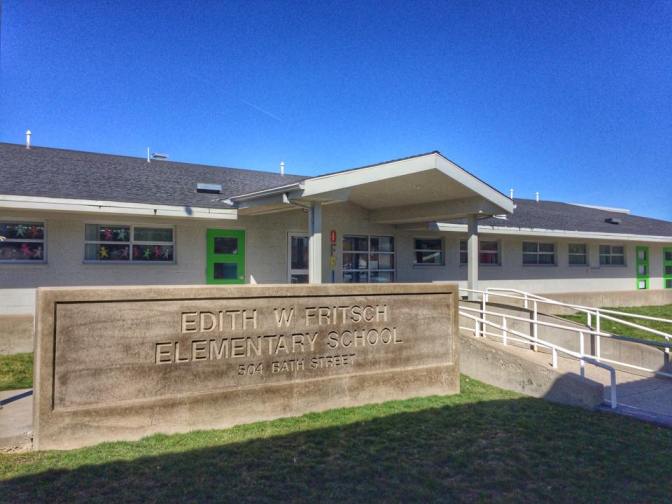 In my novel, Us, Now and Then, the fictional Libby McCormack gets her first teaching job at the very real Fritsch School in 1972 and remains at the same school for her entire thirty-year career.
Edith W. Fritsch Elementary School opened in 1961, and like other Carson City schools was named for a beloved educator to honor her years of service to the community. Local historian, Sue Ballew remembers her as “a sweet and kind teacher.” After she’d retired, Mrs. Fritsch taught Sue to type in 1961. Mrs. Fritsch also taught Sue’s father, Bill Dolan while he was in high school.

But who was Edith Fritsch? I lived in Carson City for forty years (and taught school there) and had never heard stories of her. So, I went on a quest.

Edith Gwendolyn Wooldridge was born in 1893 in the erstwhile community of Grizzly Bluff in Humboldt County, California. She taught for 42 years, 35 at Carson City High School where she taught “commercial studies” (bookkeeping, shorthand) and Spanish beginning in the 1920s. In 1930 she became Dean of Girls.

Edith Fritsch (nee Wooldridge) is pictured below in group photos of the entire Carson High faculty in 1928 and 1930. 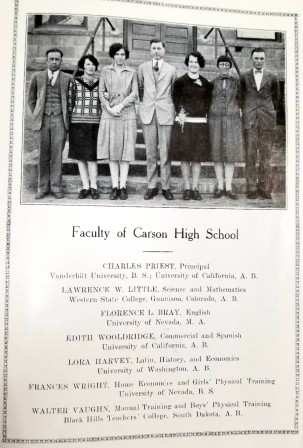 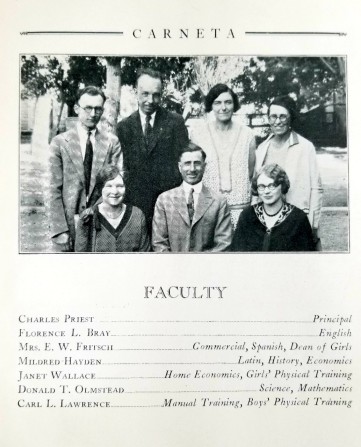 My research led me to both Ancestry.com and Newspapers.com to get a more complete picture of Edith. Ancestry provided vital records–birth, marriage, census data, death–but filling in the blanks came from those old newspapers. I spent one very enjoyable morning reading society pages from the 1930s-50s. It seems every PTA meeting, baby shower, trip to visit your sister, and illness were documented in print for everyone to read. It was like Facebook before the internet! Very amusing. But from it, I could easily gather that Mrs. Fritsch was active in Carson City clubs. Her name was often listed with Miss Bordewich and Miss Bray as attending, serving refreshments, or hosting meetings of the American Association of University Women, Delta Kappa Gamma, PTA, and Ormsby County Teachers Association.

The Carneta of 1932 was dedicated to Edith Fritsch, attesting to the esteem with which her students held her. 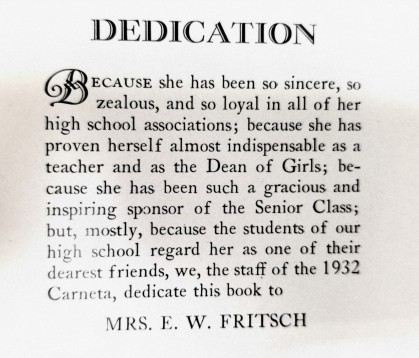 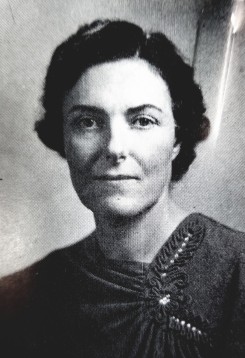 At the age of 33, Edith married Edwin Fritsch, a civil engineer. Rather late for her generation, wouldn’t you agree? However, unlike the other married women named on those society pages, she was always listed as Mrs. Edith Fritsch, not Mrs. Edwin Fritsch. I hope that’s a sign that hers was a marriage of equals. Edwin Fritsch died in 1956. The couple had no children.

PS: Thanks to Ananda Campbell at the Carson High Library for allowing me to peruse the collection of old yearbooks. I was able to gather more information and photos of Mrs. Fritsch.