Lafayette in the Somewhat United States

Last month The Washoe County Library produced a list of books for those who wanted to read and learn more about the American Revolution and Founding Fathers after watching (and obsessively re-watching) Hamilton. As I’ve read most of Sarah Vowell’s other books, I immediately put this one on hold. Once again, Vowell weaves history and culture together with field trips to battle sites, chats with local experts, and her characteristic wit.

I’ve provided a taste of her smarts and her snark here, but I encourage you to read for yourself. Today, her observations seem especially apt or perhaps COVID-19 has made me a bit touchier than normal.
“The newly dubbed General Lafayette was only nineteen years old. Considering Independence Hall was also where the founders calculated that a slave equals three-fifths of a person and cooked up an electoral college that lets Florida and Ohio pick our presidents, making an adolescent who barely spoke English a major general at the age I got hired to run a cash register at a Portland pizza joint was not the worst decision ever made.” By the way, Lafayette was not only a teenager seeking adventure when he arrived on our shores but a married teenager. He left his pregnant wife Adrienne back home with their toddler when he sneaked out of France.

And you know how we complain about how contentious Congress is now? It turns out there were no good old days. No era of good feelings.
“The first thing that happened when the First Continental Congress convened in Philadelphia in September of 1774 was that a delegate from Boston moved to open with a prayer. The second thing that happened, according to John Adams, was that two Episcopalians from New York and South Carolina opposed the motion ‘because we were so divided in religious Sentiments, some Episcopalians, some Quakers, some Anabaptist, some Presbyterians and some Congregationalist so that We could not join in the same Act of worship.’”
“And once they were done fighting the British, the Americans went back to what they were best at: infighting.”
“…disunity is the through line in the national plot—not necessarily as a failing, but as a free people’s privilege. And thanks to Lafayette and his cohorts in Washington’s army, plus the king of France and his navy, not to mention the founding dreamers who clearly did not think through what happens every time one citizen’s pursuit of happiness infuriates his neighbors, getting on each other nerves is our right.”

And conflicts weren’t just among the members of Congress, they were with General Washington himself when he sought the barest of supplies for his army.
“An indignant Washington wrote to a friend of witnessing ‘men without Cloathes to cover their nakedness—without Blankets to lay on—without shoes, by which their Marches might be traced by the Blood from their feet….’ He lost, from starvation and freezing, during that winter, more than three thousand— ‘out of his tiny army.’…. the major cause of the dearth of food at Valley Forge was not its scarcity—crops were abundant that year—but the lack of wagons to transport it to camp.’”

Remind you of any other crises when our leaders lacked the will and/or ability to solve a problem?

By detailing the battles from the defeat at Brandywine to the victory at Yorktown, Vowell demonstrates what the coordination and combining of forces (or lack thereof) mean to the effectiveness of any operation. The strength and cooperation of the Franco-American alliance overcame Britain’s top commanders. Lafayette represents that effort and is remembered by the countless towns across America named for him.
“The most meaningful namesake by far is Lafayette Square, across the street from the White House. …this is the nation’s capital of protest, the place where we the people gather together to yell at our presidents.”

The tradition of using the park for protest dates to WWI when a bunch of “disagreeable dames” from the National Woman’s Party picketed President Wilson for YEARS, demanding his support for women’s right to vote. For their trouble, they were beaten by male passersby as police looked on. The women were then arrested for blocking traffic, jailed, and served vermin-infested food.

Vowell believes it would greatly please Lafayette to know the park bearing his name is routinely used to air grievances and challenge the White House. After all he defied his father-in-law and his king, saying “I did not hesitate to be disagreeable to preserve my independence.” I think John Lewis would agree, don’t you? 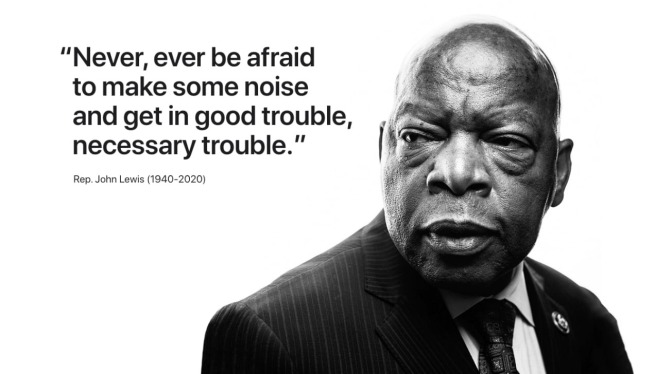 One thought on “Talk about a rebellious teenager!”