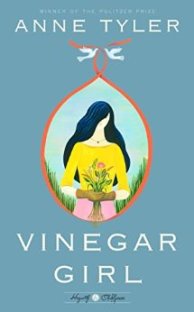 I’ve been reading and enjoying Anne Tyler’s books for decades, beginning with Dinner at the Homesick Restaurant and The Accidental Tourist. Her quirky, yet somehow recognizable characters always make me smile.

Vinegar Girl is no exception. It is a contemporary retelling of “The Taming of the Shrew” and is part of the Hogarth Shakespeare Project, in which respected and diverse authors take on Shakespeare’s best-known stories.

Here, Kate Battista finds herself stuck teaching preschool and running the house for her widowed, eccentric research scientist father and pretty teenage sister, Bunny. Being a scientist, her father has an efficient system for just about everything, from loading the dishwasher to doing laundry. He even thinks cooking just once for the entire week simply makes sense. Watch for his formula for “meat mash.” Naturally, Kate’s forthright and somewhat prickly manner means she’s almost always offending someone.

Trouble starts when Dr. Battista, who is on the verge of a scientific breakthrough that could help millions, has his lifetime of research threatened by the imminent deportation of his foreign-born lab assistant, Pyotr. What to do? An arranged marriage, of course! Kate reluctantly agrees only after it is made clear that the marriage will only be on paper. They just need to convince the Immigration authorities. But then…

Tyler writes some funny and poignant situations around the issues of romance, getting acquainted, family dynamics, and feminism. It’s a comedy with a heart, to be sure.

Pyotr explains something about his country:

“In my country they have a proverb: ‘Beware against the sweet person, for sugar has no nutrition.’”

This was intriguing. Kate said, “Well, in my country they say that you catch more flies with honey than with vinegar.”

“Yes, they would,” Pyotr said mysteriously…But why you would want to catch flies, hah? Answer me that, vinegar girl.”

On Pyotr’s odd attempts at flattery:

“He had a foreigner’s tendency toward bald, obvious compliments, dropping them with a thud at her feet like a cat presenting her with a dead mouse.”

An excerpt from Kate’s big speech on men:

“Women have been studying people’s feelings since they were toddlers; they’ve been perfecting their radar—their intuition or their empathy or their interpersonal whatchamacallit. They know how things work underneath, while men have been stuck with the sports competitions and the wars and the fame and success. It’s like men and women are in two different countries! I’m not ‘backing down,’ as you call it; I’m letting him into my country. I’m giving him space in a place where we can both be ourselves.”

4 thoughts on “Book Report: Why you want to catch flies, vinegar girl?”