At thirty, the fictional Claire Jordan finds her calling in international relief and takes a job with UNICEF, the United Nations International Children’s Emergency Fund. She advances from front-line, low-level work to needs assessment. While children’s health remained a priority, her job evolved into matching local needs with a variety of non-governmental organizations and programs. By 2000 she is focused on education equity and access for girls with the UN Girls Education Initiative. She also provides opportunities through UN Women which is dedicated to gender equality and the empowerment of women worldwide. 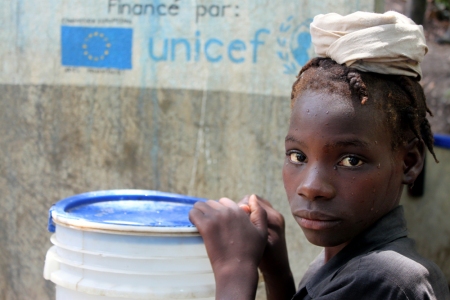 Claire recalled the Trick-or-treat for UNICEF campaign she and Libby participated in when they were kids. Danny Kaye (1933-1987) served as the UNICEF ambassador at the time and may have planted the seed of service in the young Claire. Danny Kaye reminded Claire of her handsome father. (No surprise there, I pictured Danny when I thought of Claude Jordan’s looks and charm.) Her mother must have agreed although they never spoke of it– neither while watching The Danny Kaye Show every week nor during their annual White Christmas tradition.

While she spends much of her work-life living out of a suitcase in the developing world, Claire occasionally must be back in New York at the agency’s headquarters. Here’s a deleted scene from Us, Now and Then when Claire is back in NYC at Christmastime.

Claire arrived home to her small NYC apartment from another trip to Haiti. She’d be going back again in a few weeks. Lots of work there. But this week there were meetings in New York, assuming all the staff would be stateside for the holidays and could come to an actual meeting instead of doing a conference call.

The apartment boasted no skyline views. Too far uptown. Nearly the Bronx. But since she was so rarely here, Claire found it hard to justify anything more, although now, of course, she could afford it. Minimal modern furniture with sleek lines and colorful art from her many travels filled the space. And although she admitted that no place truly felt like home anymore, this place at least felt familiar.

Dave was in Philadelphia with his mother and his sister’s family. After ten years, he remained her part-time lover, full-time friend. It seemed to be all either of them required of the relationship. She’d called her mom several times and sent gifts to her and to Libby‘s family, but she was feeling blue.

To console herself on the last Christmas Eve of the century Claire opened a bottle of good Australian Shiraz and poured a large glass. She opened the small photo album that her mother had sent. A solitary Christmas away from home, wine, and a photo album. A recipe for melancholy if there ever was one.

A few years ago, Claire had asked what happened to all the pictures of their little family, her baby pictures, her father. Sylvia said she had put them all in a box after Claude left, because seeing them made her too sad. This Christmas though, Sylvia sent Claire this album.

And here was the picture that did Claire in. She looked to be about four or five, wearing a sun-suit, sitting on her handsome father’s lap on a patio chair in their old backyard on Mary Street. And then the picture of her sixth birthday party, the one where she got the Tiny Tears doll. Nothing tiny about the tears washing down her cheeks now. She stood to get a tissue from the bathroom.

“Well, enough of that,” she told herself after blowing her nose and topping off her wineglass. She sat down again and opened her laptop. After checking her in-box–nothing–she wandered over to eBay and searched for “Tiny Tears.” She knew exactly what she was looking for. And here it was. 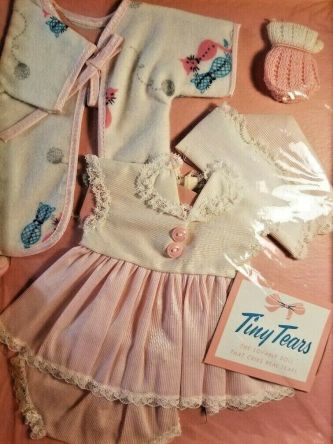 Her head and body still are peachy and match very well. No darkening! Light brown hair is curly, complete, and clean. Big, beautiful blue/green sleep eyes open but need some encouragement to close. Her cheeks are very rosy, with a few spots on each side where the blush has rubbed away.

This Tiny Tears comes with her original white romper with her name stitched on in red. She’s wearing a white bonnet and pink knit booties. In addition, she comes with another romper, pink and white bonnet, pacifier, pink nightie, hooded robe, a dress with pink pantaloons, an extra diaper, cup, two bottles, bracelet, hairbrush, and a burp cloth. All original! All from the original owner and are vintage. She also comes in the original luggage box. She has been well-loved and shows it.

Every line, every word carried a flood of memories. She could almost smell what Libby called the “new doll smell.” It reminded Libby of happy Christmas mornings. To Claire, it usually evoked grief and loss reminding her of her father and that last birthday with him.

Claire placed a bid. $500 ought to be high enough for your heart’s desire. Although, truthfully, she couldn’t think of a price too high. She wanted the whole thing. The pink suitcase, the doll, the sun-suit, pacifier, bottle, bib. Her papa. Everything. She swallowed the last of the wine and signed off the computer. Before going to bed she took a long look out her window at the starry sky, hoping–but not expecting–to see Santa’s sleigh and fell asleep listening for sleigh bells.

The next morning, Claire started the coffee and sat down at the computer to check her email. “Congratulations! You’ve just won Tiny Tears.” Maybe there is a Santa Claus after all.